The N2 Company Gives $3M to Fight Human Trafficking in 2022 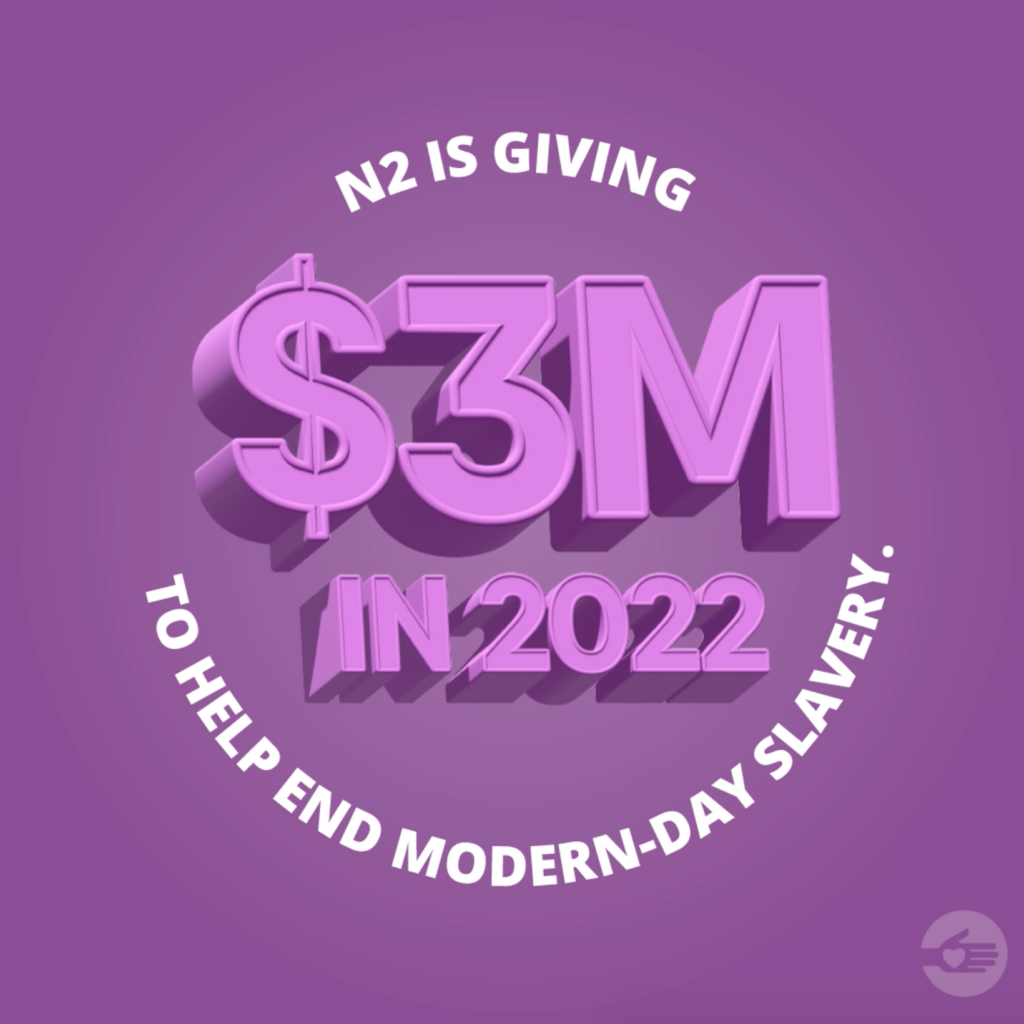 Every day we are faced with many injustices around the globe. For The N2 Company, we can’t shake the fact that right now more than 40 million people are trapped in forced labor or sexual slavery. That’s why in 2016, N2 began investing in nonprofits who are experts at fighting against human trafficking. Through N2GIVES, our giving program, we’ve donated more than $16 million to fund the life-saving efforts of nonprofits fighting to end modern-day slavery.

This is only made possible through the dedication and hard work of our Area Directors, the partnerships of local advertisers, and you, our engaged readers. Thank you for making this change possible. We partner with three anti-human trafficking experts who collectively attack slavery from all angles. We are proud to announce our continued support of Love Justice International, Rescue:Freedom International, and International Justice Mission as our 2022 N2GIVES nonprofit partners. All three organizations pour their heart and soul into their work, each serving as a vital player in the anti-trafficking movement. They have specific strengths and work with those in localized areas of expertise to combat modern-day slavery. Read on for updates on their recent progress and how they each uniquely fight human trafficking.

Many countries were still in some form of lockdown this past year, making it more difficult for teams to identify potential trafficking activity. Despite the obstacles, Love Justice International’s teams were able to intercept more than 4,000 victims, educate them on how trafficking works, and restore hope to them this year. Traffickers prey on the vulnerable, luring them into all-too-common scenarios. Victims can be taken away from their homes and families and escorted to bordering countries under the guise of many promises. As a complete outsider, the victim has no one to turn to for help, and they realize the true nature of what they were “promised.”

Love Justice International (www.lovejustice.ngo) is on a mission to disrupt these tactics. By crowd-watching for suspicious behavior and questioning potential traffickers and victims, Love Justice has successfully intercepted more than 26,000 potential victims, protecting them from exploitation before it even starts. The nonprofit currently operates monitoring stations in 22 countries at 61 prime transit points in South Asia, Southern Africa, East Africa, and West Africa. With the continued financial support of N2GIVES, Love Justice is in the process of expanding its transit monitoring work, doubling the number of stations during the next three years and expanding into new countries – including the first pilots in the United States and Mexico. We’re proud to stand by this nonprofit and partner with them to prevent human trafficking.

Rescue:Freedom attacks human trafficking from all angles and stages, both locally and globally. The anti-trafficking nonprofit works with a network of over 40 Local Partners made up of expert organizations who understand the vulnerabilities of sex trafficking in their communities best and combat the issue at its source. Rescue:Freedom’s holistic model makes their solution so effective; the organization has identified eleven key strategies that must work together for trafficking to be abolished once and for all. This past year, Rescue:Freedom nearly doubled their network, furthering their mission of ending slavery in our lifetime.

We are excited to continue to give to the Rescue:Freedom network, connecting smaller local organizations and strengthening their collective impact. Because of Rescue:Freedom’s strategic model (rescuefreedom.org), dozens of lives are freed each month, thousands of survivors are learning to thrive, and the most vulnerable people are protected from exploitation every day. It’s an honor to share a vision of hope with this global organization.

IJM believes every person deserves to be free, and they partner with local justice systems to end violence against those living in poverty. As a result of strict lockdowns this year in places like Southeast Asia and India, online sexual exploitation greatly increased and tens of thousands of migrant workers were vulnerable to trafficking and bonded labor. We’re grateful IJM was still able to deliver crisis relief, restore victims, and equip governments to protect their communities from violence.

IJM (ijm.org) works with local authorities in 24 program offices in 14 countries to restore victims of violence, forced labor, and sex trafficking, fight in courtrooms until slave owners are put behind bars, and provide training and support for local law enforcement to end the cycle of violence and injustice. IJM has a vision to rescue millions, protect half a billion, and make justice for the poor unstoppable by 2030. A beautiful vision we’re honored to continue to stand by and support.

Learn more about the nonprofits we support through N2GIVES by visiting n2gives.com.

PrevPreviousYear in Review: Magazine Industry 2021
NextYes, You Should Be Taking Advantage of Your Company’s Financial Wellness Perks (& Why)Next
Menu
Menu